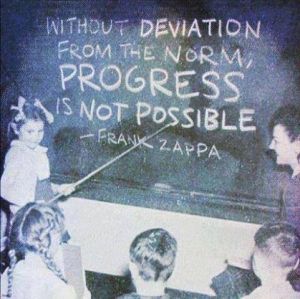 Stockholm Syndrome is a psychological phenomenon in which hostages display empathy and sympathy for their captors, often developing positive feelings towards them and defending them.

I’m often fascinated by how people, when they walk through the door of their workplaces, adopt behaviours akin to the symptoms of Stockholm Syndrome.  Despite knowing in our hearts and in our guts that much of how workplaces operate is nonsensical and even anti-human, we maintain the charade that it’s the best way of doing things.  As Alan Moore points out in No Straight Lines, industrial systems were not designed with human needs at their heart, yet we still organise workplaces along such lines.  We go along with the deceit that doing things in a mechanistic, command-and-control way is the right way to do things.

A living system such as a family or a business operate with a number of norms which remain largely unspoken.  Just as families have an idiolect, a set of values and beliefs and ways of doing things ‘properly’, so do organisations.  These unwritten and unspoken rules maintain the status quo by ‘training’ people how to act and unless new information enters the system, it will continue to operate as it always has.  Species adapt to their environment in order to be successful.  The same is, of course, true for us.  At work, we often adapt by adopting an alter-ego in order to be successful.  When we take up employment in an organisation, we will eventually adhere to the ‘correct’ ways of doing things in order to survive there, even if they jar with our personal beliefs.  That, or we will end up having to leave. 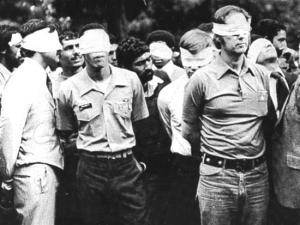 It is worth mentioning the words of Robert Jackall: “What is right in the corporation is what the guy above you wants from you.”  He lists the basic unwritten rules in the contemporary workplace as:

“(1) You never go around your boss. (2) You tell your boss what he wants to hear, even when your boss claims that he wants dissenting views. (3) If your boss wants something dropped, you drop it. (4) You are sensitive to your boss’s wishes so that you anticipate what he wants; you don’t force him, in other words, to act as boss. (5) Your job is not to report something that your boss does not want reported, but rather to cover it up. You do what your job requires, and you keep your mouth shut.”

I know many are attempting to retool organisational life so that it is more respectful and inclusive but if the same old hierarchical structures and mentefacts remain in place, not much has changed very deeply.  If Jackall is right, those five rules delineate the forces that act upon a system (workplace culture) to shape behaviour of those within it.  Not so great for participatory leadership and fellowship in the workplace.

How can we go about generating new ways of ‘doing organisations’?

One way that I find especially valuable is Sociodrama.  This cutting-edge human technology has inherent in it a systems approach to organisations which develops our capacities to see a bigger picture.  It also provides the stage whereon we can develop capacities for purposeful collective action.

It’s vital, I believe, that we begin to see.  We need to be able to see the ‘stuck state’ that many businesses and institutions are in.  We need to see the hidden conflicts, competition to climb higher up the ladder, plays for personal power at the expense of others that are the fruits of hierarchical structures.  We need to be able to see the casual incivility and interpersonal violence that comes from spending our days in anti-human systems that (no matter how it’s dressed up) treat humans as resources.  We also need to see the strengths and opportunities that live within a system; it is from these that novel, creative and more effective ways of working will begin to emerge.  Really important in all this is that we are not the only ones that see this and the effects that they have on ourselves and others; that we shift from “Me” to “We” and do it in community with others, otherwise we may be thought of as foolish or find ourselves isolated.

The practical method of Sociodrama allows people to collectively uncover what may have been previously unseen.  It also creates the opportunity for people to have conversations about the unwritten and unspoken rules that keep them hostage, but which have not been previously named or discussed.  It begins by weaving together a group feeling and establishing the focus of the group’s work.  As the “Sociodramatic question” coalesces, the group will work in action together, with the assistance of a capable Director, to explore the many elements of the system which are related to this focussed question.  Examples of Sociodramatic questions that have focussed some of the work I’ve done in businesses include:

I think the two key words in these questions are “How” and “We”.  A shift in a set of behaviours or attitudes will come about meaningfully in a system when it’s done collectively.  When the Sociodramatic question crystallises, it is as a result of the group’s work; they warm up to and engage themselves in the purpose of the workshop.  What follows comes about because it is an act of will on the part of each individual.

In Sociodrama, as with all Morenian action methods, the group develops action-insight and begins to identify things which may have been hitherto unknown or unaddressed.  Some of these insights are related to the dynamics between the various parts of the system.  Some of them are related to the rules, spoken or unspoken, that influence how the system works.  Some are connected to things that work well and others, to things that are not working so well.  In effect, the group begins to behave like the boy who cried that the Emperor wasn’t wearing any clothes.  The clarity of vision that comes from Sociodrama can assist us to free the hostages; this clarity is a first step, at least.

From here, the next phase is to work cooperatively to create something new which can alleviate or deflect some of the less desirable forces that influence the system.  Typically, one person will struggle to effect change in a system.  But collectively, members of a group can create structures and start inter-relating in ways that transform the system and to grow greater participative fellowship in the workplace.  Sociodrama has as one of its aims, to warm us up to a state wherein we are able to intervene in our own social systems.  The Sociodrama Director will approach the work not as an expert or guru with the “right” answers, but as the Auxiliary, there to help the group warm up to this state of spontaneous, co-responsible creativity.

Towards the end of the process, the group spends some time making sense of the Sociodrama, with a focus on the initial Sociodramatic question.  As meaning-making beings, we humans need to make some sense of the experiences we have.  An action method such as Sociodrama cannot help but change how we think about what works best.  When a group experience such as Sociodrama brings up new insights and generates something innovative between us, we need to reflect and shape a collective understanding, as best we can.  When our collective understanding of ‘how things work’ shifts and we have a collective understanding of ‘what works best’, we can commit to changing how the work works.  From Sociodrama, we can derive deep learning and transformation.  As Lao Tzu is quoted: “If you tell me, I will listen.  If you show me, I will see.  If you let me experience, I will learn.”

My experience is that Sociodrama generates greater freedom to counter the effects of our personal Stockholm Syndromes and to do this in community with others.  Ultimately, why shouldn’t work work for everyone?  Everyone.

I am Director of Quantum Shift Global, based in London. I apply a cutting edge human technology to assist people to make the changes in behaviour and attitude that they and their businesses need in an increasingly "social" business world. View all posts by John Wenger

14 thoughts on “Counter-acting the Stockholm Syndrome”

These are some good reads

Holding space to allow the specialism of Organisational Psychotherapy to emerge into the world.

The Nature of Business

The Joy of Work

Work and the search for what really matters

The art of interaction, the design of digital work and the science of social complexity

Good lives on our one planet

Playful with not knowing

Facilitating critical thinking about the business of business

This Much We Know

Making the transition to a better world

Working together to harness your full potential

Get "fit for randomness" [with Ontonix UK]

You MAY model, manage or mitigate aspects of risk...but you MUST prepare for uncertainty!

Innovation at the speed of coffee

Shifting organisations to a better place

Deming, Vanguard, Systems Thinking and that, in a normal, ordinary command and control organisation

bringing out the real leader in you